After many nerve-racking attempts, I finally reached Guruji at his ashram, in the foothills of the Himalayas. Calling him is always such an ordeal, and not because it is any harder for a satellite signal to reach a small stone temple by the side of the Beas River in the Kullu valley than it is to reach a house a mile down the road from my current home in Los Angeles. It is not the time difference either, although that makes it harder, for sure, 12 1/2 hours puts us on opposite sides of a day as well as opposite sides of the Earth. It is only that Guruji, unlike most of us, forgets his phone by his bedside (his bed being two blankets on the floor) for entire days at a time, and he often leaves it on silent mode, at that. By the time I do reach him, usually after dozens of attempts spanning at least several weeks, I am beside myself with worry. How would I actually know if something had happened to him? At his old ashram (house of worship and Yoga study), I knew his students quite well, but he has only moved to this ashram after I moved from India to LA, and I am as unfamiliar with his new community as they are with me. The only time I was at this ashram, several years ago, I meant to give the shopkeeper across the street a few hundred rupees and my phone number; but when it actually came down to doing it,  it seemed a little melodramatic, and I feared it would possibly embarrass Guruji, this Western woman so keen on his fate.

“Ah, Umanath (my Hindi name), what could possibly happen to me” he laughs every time, this man who owns nothing, who lives on the banks of a notoriously treacherous river, who has smoked homemade cigarettes his entire life, and has survived tuberculosis and 2 near-fatal accidents. He lets me chide him for five minutes, maybe six or seven, defending himself lightheartedly the entire time. “You know I don't care about the phone,” he will murmur,  “you know I forget, you know I don’t get time, you know nothing will happen to me”( no, I don't know that). Finally, I can tell by a shift in his breath that it is time to bring the scolding portion of the conversation to an end, and we move on.  No matter how far I have drifted from my yogi studies into my LA life, my LA mind, (“your book knowledge mind” Guruji calls it), I only need a few minutes on the phone with Guruji and my mind comes back to its center.

"So what's up in America?" he will ask me, rhetorically, I suspect, "anything new or interesting for me to learn?" I might have saved up some things to tell him but when it actually comes down to it, there is not really anything new or interesting from America for him to learn. "Busy?" he will ask. Yes, guruji, busy. "You always did like the busy", he will laugh, "like a snake biting its tail. Busy is ok. But don't forget to stop for long enough to listen."

"If you were really listening, you would know I am Ok", he usually adds, at some point towards the end of the conversation, hitting a sore spot like only he knows how. "What are you listening to, over there in America?"

(Ah Guruji, I wish I had some answer for you. When I first moved here, I tried with all of my might to listen for something that I could make sense of, something that would help me understand this new place (my country of birth, yes, but the absence had been a very long one, a lifetime). I tried to hear the whisper of the earth through the pavement, but it was like trying to eavesdrop through a cement wall.  I'm afraid I stopped trying after some time. All I was hearing was the din of the garbage trucks and the endless gardeners mowing the perfect grass out on my urban street.

This time, reaching Guruji has taken me even longer than usual. When weeks of attempts turned into months I really became quite frightened. So when he finally answers, one early morning (LA time), I am overcome with relief and my chiding falls away almost immediately. I want to know about the mandatory lockdown, the virus, if it has reached his region, and how he and his students at the ashram are coping. He assures me he and his students are ok, living on their stores of flour and lentils and ghee, and on frequent donations of fresh fruit and vegetables, plus onions, garlic, ginger, and chili peppers, by his devotees in the town. They, like so many in India, consider it their honor and duty to make sure the teachers and priests in the temples and ashrams are ok (even if it means going out during curfew).

“Ah, Umanath” he says with great feeling, once he is sure that I, the kids, my mother, my siblings, my neighbors, and everyone I know are also ok, “look how much Shanti has come into our world, no? It is a miracle, yes? Like the days of old” Shanti means peace, shalom, salaam. It is what every yogi strives for,  it is the very center and source, where our breath comes from and goes back to, it is where we have come from and where we return to when all is done. In all of the Yogi prayers, the last words are "return us to Shanti (peace), God, your name is Shanti, Shanti, Shanti". I tell him that I now hear birdsong while walking around my neighborhood, that our sky is always blue, and that for the first time since I arrived in the US, I can sleep with my windows open because of the quiet streets. He tells me that sitting on his veranda the other day, after his morning meditation, he looked up and could not believe his eyes: an entire new mountain range was visible behind (what had been) the farthest range. “They are completely covered in snow! I got cold just looking at them", he says, excited like a boy, "Everything is becoming so clear” he added after a pause, his voice so full of gratitude and humility that my mind becomes completely still and we both laugh, and stay together that way for a long moment, LA-Himalaya, past-future, in our bubble of peace, until I hear a little beep telling me that my calling card balance had just run out. “That’s ok, Umanath”, Guruji said, “it is time for my evening prayers, anyway”. I don't like saying goodbye, but it is time.

Sitting on my patio, with my eyes closed, just a few more moments before I go back to busy, I tried to listen better. I swear I could hear his prayer bells ringing, all the way across the world, as the crescent moon rose over a new Himalayan range. 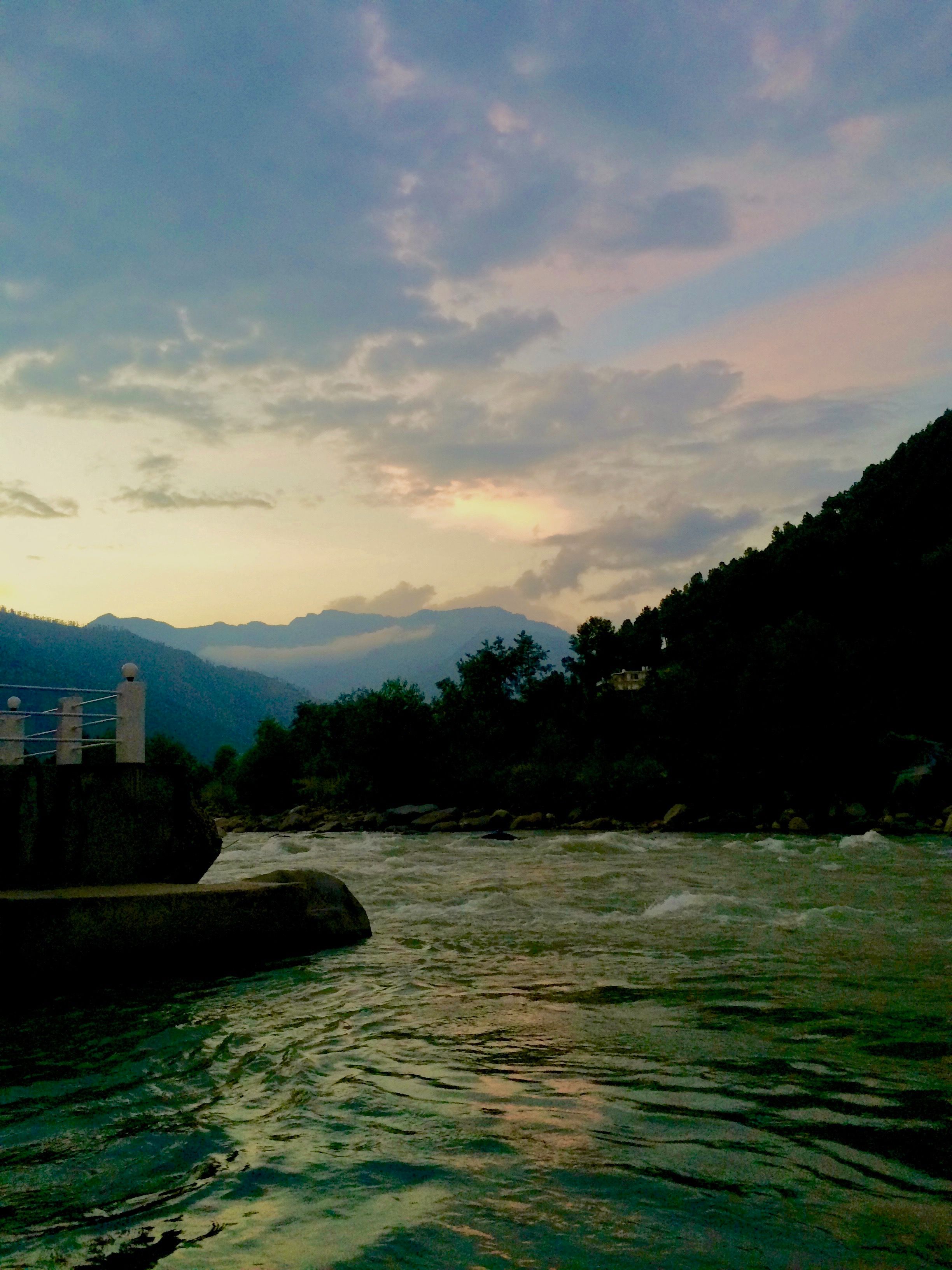